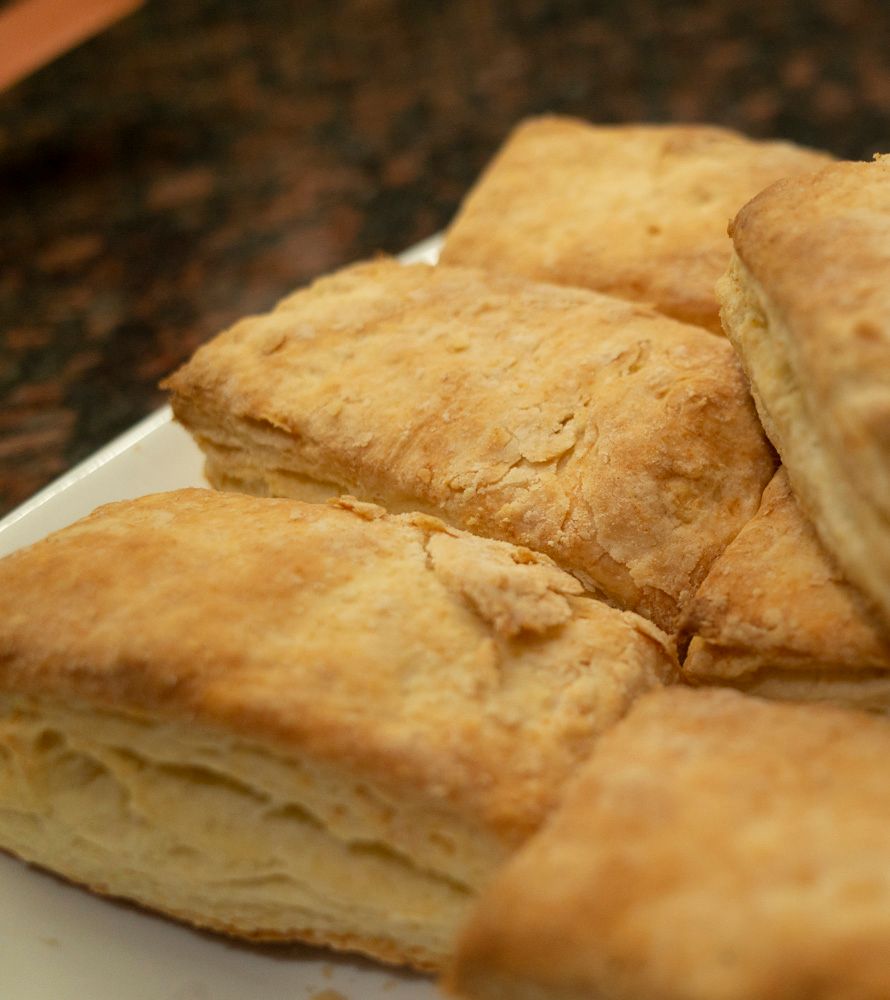 There tend to be two kinds of people in the world: those who like biscuits that are golden-brown, buttery rich, and flaky, with layer after layer of crisp biscuit perfection. Then there are those who choose biscuits that are golden-brown, buttery rich and fluffy, with a light texture and pillowy crumb. Regardless of your preference, it's hard to go wrong: after all, the end result is a delicious biscuit.

There's a lot of lore as to what the right way of making biscuits might be. Some recipes say that you can only make biscuits with this flour or that kind of milk. All of those things matter, but sometimes not to the extent you may think. Biscuits, ultimately, will be more alike than they are different, regardless of the recipe you use.

We still manage to create a pretty respectable biscuit, despite using Canadian AP flour most of the time. The flour origin is worth mentioning because Canadian flours are higher in protein than their American counterparts; AP flour in Canada can be the equivalent of many bread flours in the United States.

It's true that cake and pastry flours can make a biscuit with a more pillowy texture, but sometimes, you want a biscuit that's good enough to eat on its own and sturdy enough to stand up to savoury sides like sausage gravy or goetta.

Like most biscuits, the primary leavening (rising) power for these comes from a healthy dose of baking powder. These get another small boost from baking soda.

We put buttermilk in the dough (buttermilk has been acidified thanks to bacterial action, just like yogurt and sour cream). If you don't have any buttermilk on hand, you can use milk to replace the dairy proteins and a tablespoon of vinegar to replace the acid. It's worth seeking the buttermilk out, however, as it makes the biscuits much more flavourful. Baking soda has a high pH. Together, the two produce gas.

Butter gets incorporated, buttermilk is stirred in...it's largely how the biscuits are treated from this point forward that determines your final result. Keep in mind the following possibilities as you think about what kind of biscuits you want to make.

For quick and easy drop biscuits:

Stir the dough together, adding an extra half cup of milk and making sure there are no pockets of buttermilk or dry flour. With a tablespoon, drop balls of dough onto a prepared surface: a greased or nonstick pan, or a pan covered with a sheet of parchment. You can use your fingers to drop the dough, or something like a rubber spatula or kitchen spoon. Avoid using another spoon as it can scratch the surface. Drop the balls of dough two inches apart, and bake until golden brown. This is a great option on a lazy weekend morning, as cupboard to oven takes about five minutes. Best served drizzled with butter and sorghum syrup, or dipped into chili and chowder.

Take care to work the dough as little as possible. Turn it out onto a floured surface, and press the crumbs together until there's a single ball of dough. Work quickly, as the butter will melt. Work the dough into a rectangle three inches wide and roughly half an inch thick. With a sharp knife or pizza cutter, cut a thin strip off of all four sides of the dough. This prevents folded dough from holding your biscuits down in the oven.

Cut vertical strips according to how large the final biscuits should be: you might get seven or eight classic biscuits from a standard batch, but only six or four if you want larger portions. These biscuits are great with a classic southern sausage gravy.

Like above, turn the dough out onto a floured surface and bring it together. Take a floured rolling pin and roll out the dough, working quickly to avoid melting the butter. Fold the dough in half. Pick it up, flour the surface, then flour the top of the dough and roll it out again, always folding in the same direction. If it takes too long, rest the dough in the fridge, lightly wrapped in plastic wrap. It's important to keep the butter cold until the biscuits head into the oven. If it gets to be too long and thin, cut the dough in half along the short axis and stack the two pieces.

Continue until the dough has been rolled and layered at least four times. If you're familiar with making croissants, you'll probably recognize the technique used here: it's known as laminating a dough because you work sheets of butter between layers of wet dough. Roll out the final dough  into a rectangle three inches wide and proceed as above. If your biscuits turn out too fluffy, try knocking the baking powder down by a titch. Biscuits like this work well as sandwiches or split and topped with scrambled eggs.

For our favourite buttermilk biscuits:

In this case, we're going to combine the two techniques to get a biscuit that does a pretty successful job of catering to all tastes. Stir just enough to bring the dough together. This time, only roll and fold the dough in half three times: there's sufficient leavening to keep the dough fluffy, and you put in enough layers to make them easy to split apart. These biscuits go well with pretty much everything.