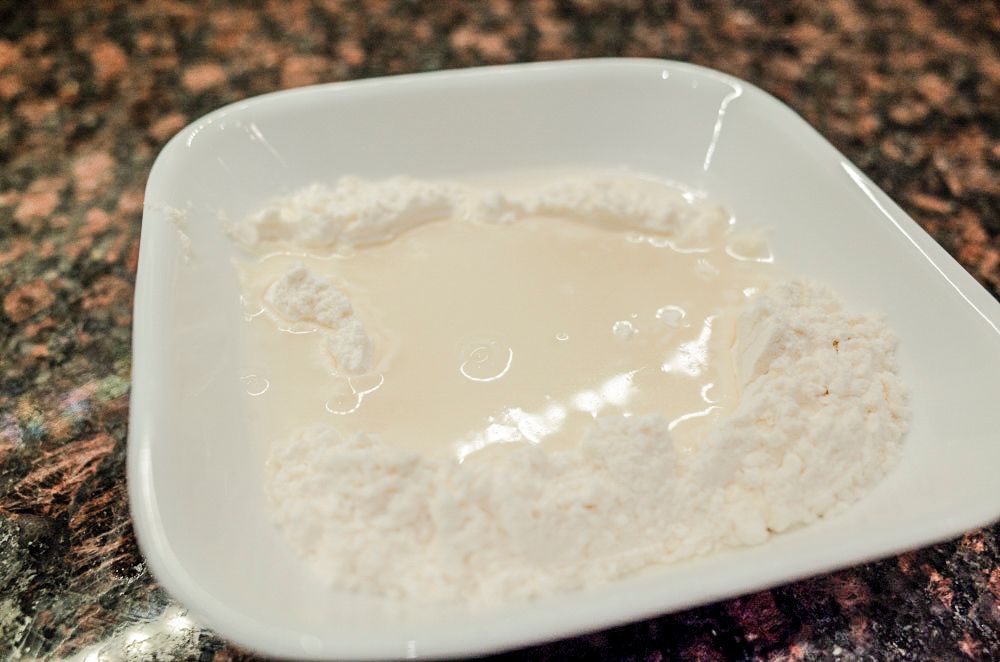 If you're still a little unsure as to why you want to experiment with sourdoughs, take the time to read our introduction to sourdough. Or follow the directions on how to make the starter - you don't need to know anything about sourdough to get started - then go back and read the primer when you have a few minutes.

New to experimenting with sourdough? You may wish to stick to using white flour. You can absolutely use other flours for sourdough, such as rye, whole wheat, and freshly milled berries, but with their varying (and sometimes much richer) sources of nutrients, they can be primed for spoilage.

In a clean bowl, stir together equal parts flour and water. Add yeast and stir to incorporate. Wrap with plastic wrap and place in an out of the way spot on the counter or in the fridge.

On a regular basis, discard a portion of the starter, and mix the rest into a clean bowl with a 1:1 flour:water mix. To use, add a heaping spoonful of starter to any standard recipe in place of yeast. The best time to harvest from a starter is a couple of hours after feeding, when it's active and swollen with CO2. Experiment with using a higher proportion of starter to dough and note the effect it has on the crust and texture of the final product.

That's it? When can I use the starter?

Actually, it's ready to use just a couple of hours later; you'll start to see it rise and foam. At this point, using it to leaven your breads will be similar to using the original instant yeast, as everything is still neutral.

You might be wondering why, if this is about how to make a sourdough starter, why we spike the punch with a batch of commercial yeast. In our post about sourdough, there's a section on how sourdough starters can remain free of apparent spoilage for so long.

Adding a bit of starter yeast prevents colonization by food spoilage microorganisms, which can waylay you right at the start. In just a couple of days, the starter will inevitably be colonized by lactobacilli and taste increasingly sour. Over time, more strains of yeast and bacteria will colonize your starter. Some will stick around, and others will pass through.

If you find yourself with a starter you really enjoy, try to keep its environment as stable as possible: no strong changes in temperature through the day or season, not allowed to dry out, etc. Changing an environmental factor can differentially affect microbes, which is why your winter sourdough bread might taste different from your summer sourdough bread. On top of changing the actual population makeup of your culture, different temperatures will have various impacts on fungal and bacterial metabolisms. That means that bread leavened with a sourdough starter at one temperature will taste different in comparison to bread leavened with the same starter at a different temperature.

Can I keep it on the counter or should it stay in the refrigerator?

For the first night, leave it out. After that, it's up to you, what you want in your sourdough, and how busy you are. Keeping a sourdough starter on the counter is perfectly safe, though it is more prone to spoilage by dint of being warmer. If you're looking to experiment with whole wheat, freshly milled, sprouted, or rye starters, try keeping them in the fridge until you have a stable starter going.

Keeping a starter in the fridge may result in a stronger sour flavour than one left out on the counter. That's in part due to the fact that the yeast can better outcompete the bacteria for resources at room temperature, and it's the bacteria in a sourdough starter that are responsible for most of the sour. Another way to modify the sour levels in a starter is to delay or speed up its feed cycles. If you like a strong sour flavour, leave it in the fridge, don't feed your sourdough every day, and don't replace more than 50% of your starter at any one point. If you prefer a mellower flavour, try fermenting it on the counter, feeding it daily, and replacing more than 50% during a feeding.

A note of caution: if you replace too much of a starter in too short a period of time, you'll weaken the tolerance to outside colonization that you've built over time. If your starter develops a strong off-smell or taste, try following the steps to increase the sourness before you write it off entirely.

Daily feedings, huh? What do I do with all this extra starter?

Obviously you can always add a bit of starter to your daily baking, whether it's a standard bread of even a yeasted doughnut. But you can incorporate extra starter into pancake and waffle batters, cakes, and other dishes.

You can also use any sourdough starter you make as a means of kickstarting beer production. The sourness is mediated through the addition of hops: hops exhibit strong antibacterial activity in beer, and can inhibit the sour-producing bacteria in your starter. Thus the waste from a single starter could brew a wide variety of beer.

Incidentally, if you still find yourself wasting more starter than you're comfortable with, just reduce the amount you make. You can still do daily feedings and develop a complex starter with just a couple of spoons of flour and water per refeed.